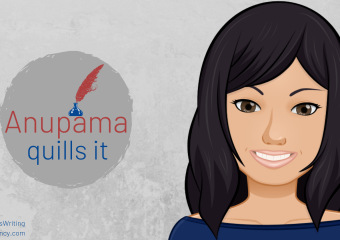 Welcome to Anupama Dalmia‘s space, where she discusses everything about ‘writing’.

Anupaman calls herself a wanderer at heart and loves to explore new places. She also actively gets involved in social causes to make a difference in her own small ways. She has been involved in counselling of rescued human trafficking survivors during their rehabilitation and strongly believes in being the change that we all wish to see in the world. There is a stream of truth that flows in her work which seh is willing to share with us as she #QuillsIt.

Sit back as Anupama takes you on this journey every Wednesday. Right here, on her space.

Anupama Dalmia is a multiple award winning blogger, author, influencer, creative writing mentor, multi-faceted entrepreneur and mother to a 4-year-old. Donning multiple hats comes naturally to her because she lives to breathe her passions every moment of the day. By qualification, she is an MBA in Systems and Finance and B.E. in Computer Science and she resigned from her lucrative IT job after a 6.5 years stint to pursue her creative interests.

Her literary work has been published in various coveted and leading magazines, newspapers and online platforms of India. She has been featured among the top women bloggers of India by Women’s Web and among the ten inspiring people who are driving positive change on social media by Youth Ki Awaaz. She was also featured by Femina among the leading five bloggers of South India and has made her way into Newspaper dailies like Eenadu, Deccan Chronicle, The Pioneer and TOI. She is a Champion at Sheroes which is a community of 15 million women and is a certified Amazon Influencer with her own storefront of recommendations on Amazon.

She is a 4-time winner of the Orange Flower Awards for personal blogging, writing on parenting and food blogging. She won the “Best Blogger of the Year” award at the Lady Boss Awards presented by Mompreneur Circle in 2018. She was a finalist at the iWoman Global Awards 2019 in the category of “Woman Icon of the Year” and was chosen by Mompreneur Circle among the top 11 women entrepreneurs of India for their “Inspiring Woman Entrepreneur” series. Recently, she was conferred with the “Influencer of the Year” award at IBM Awards 2019 and the “Torchbearer of Blogging” honour by Millennial Worx at Big Blogger Awards 2019. She has won numerous short story writing and blogging contests across leading online platforms and is among the top ranked writers on Momspresso and Women’s Web.

Her debut e-novella “Aarohi” has made it to the Amazon bestsellers list consistently and also finds a place in the top 3 in Goodreads list of best kindle unlimited picks from Indian authors. She was listed by Critic Space Journals at the 11thposition for “Aarohi” in their list of top 100 Indian debut authors. Her second novel “Muffled Moans” is an international anthology on the theme of abuse.

She is the Founder and Chief Mentor at Beyond the Box which is her venture to mentor kids as well as adults on creative writing and thinking through unconventional methodologies.

She is the Founder and Choreographer at Rhythms & Beats – a dance enterprise that is into dance workshops and events.

She also runs a cookery website along with her mother called “Tingle Your Taste Buds” which is an award-winning portal with a dedicated subscriber base. Her efforts to make her mother live her dreams has been featured by “The Better India”, “Women of Courage”, “First Moms Club” and “Amar Ujala”.

Check how she #QuillsIt here:

Importance of Grammar and Language in Creative Writing

Patience is the Strongest Virtue of a Writer