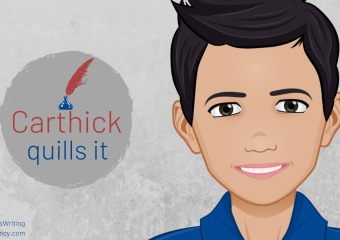 Welcome to T F Carthick‘s space, where he discusses everything about ‘writing’.

We crossed paths with Carthick by fluke but what we realised is that he is a person who is generous and does not hold himself from sharing what he has. And so from an abundance of knowledge, we decided to borrow a few pearls for #QuillsIt.

Sit back as Carthick takes you on this journey every Wednesday. Right here, on his space.

T F Carthick is the author of the highly popular Unfairy Tales series of which two books have been published so far – ‘Carthick’s Unfairy Tales’ and ‘More Unfairy Tales’. His works, which are a retelling of Grimm’s fairy tales have found resonance with adults as well as children. While children have largely enjoyed the humour and related to some of the characters, the main charm for the adults has been the literary allusions, satire and commentary on modern society. The books have been used as reading material for four creative thinking workshops for children and youth in Noida, Hyderabad and Wayanad.

He has also co-authored a collection of crime thriller novellas titled ‘Sirens Spell Danger’. Many of his works have featured in multi-author anthologies and literary magazines.  He has been blogging for 11 years and runs two blogs – Lucifer House Inc. (www.luciferhouseinc.blogspot.com ) and The Many Worlds of T F Carthick (www.karthikl.com) where he has shared many of his shorter works of fiction, musings and childhood memories. As a blogger, he has won over a dozen awards in various contests.

He is an engineer from IIT, Madras and MBA from IIM, Ahmedabad with a brief stint as an exchange student in the International University of Japan. In a career spanning sixteen years, he has worked as an IT consultant, Business Excellence Consultant and Operations strategy consultant across industries and across geographies. He currently works as a digital innovation consultant focusing on areas such as Analytics, Artificial Intelligence and Blockchain.

He lives in Bangalore in a house filled with books and human family members.

Check how he #QuillsIt here:

Who, When and Where

How, What if, What next