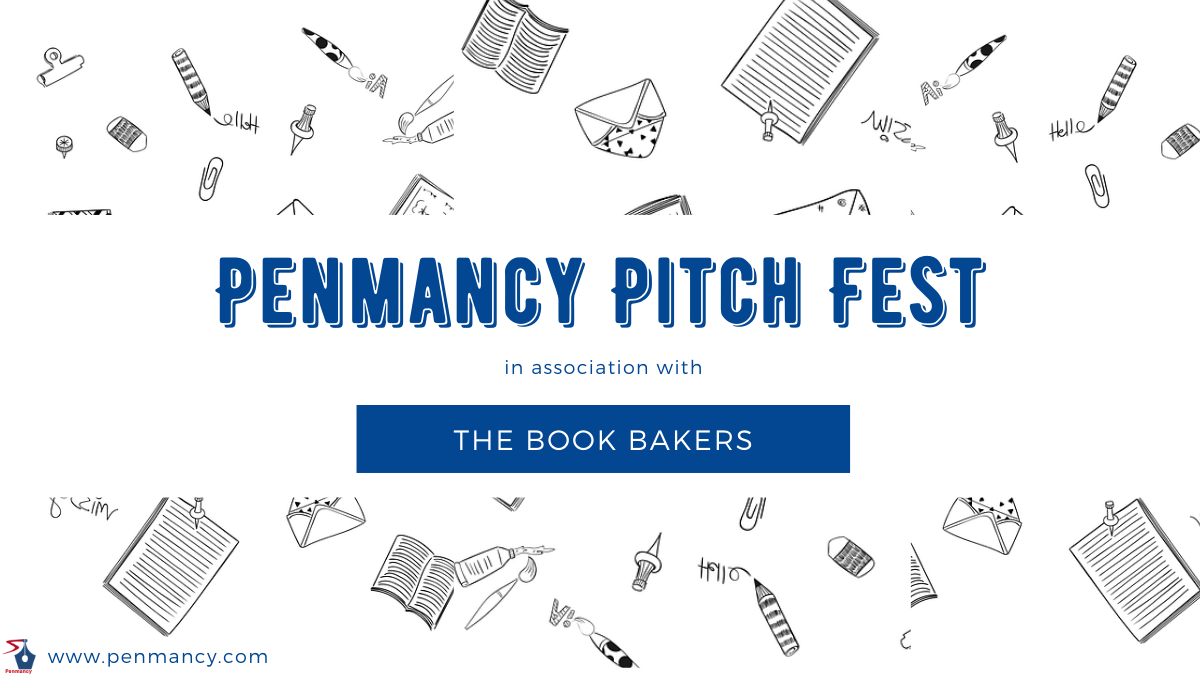 Penmancy Pitch Fest- 2020
In association with
The Book Bakers

We’re stepping into new territory and we’re excited to spill the beans here. We’re opening our doors to an Online Pitch Fest for aspiring authors on a ‘highway to publishing’, in association with The Book Bakers.

About The Book Bakers:

The Book Bakers Literary Agency is the largest and one of the most successful literary agencies in India, having represented more than 650 books across a wide variety of genres. Their clientele ranges from 13-year-old authors to 90-year-old debutants spread across 31 countries globally. Co-founded by bestselling authors, Sanjeev Mathur & Suhail Mathur, The Book Bakers Literary Agency has worked on more than 900 books in various capacities and have sold 29 books for visual adaptations in the last 5 months itself.

Below is all the information that you might need to apply for the fest.

WHAT IS A BOOK PITCH?

A Book Pitch is the premise of your book. Share your pitch with your story’s central concept showcasing the reason for us to take it up for publishing. The event is conducted in three rounds the description of which follows.

(Shorts stories in the mentioned genre/ category are also accepted)

Suhail Mathur is an award-winning and best-selling author of the historical-mythological fiction, The Bhairav Putras and the mythological-fantasy, The Hunt for the Rama’s Bow, a TedX speaker, and is one the country’s premier literary agents via his agency, The Book Bakers, through which he has worked on more than 500 books.

He has also worked as an English cricket commentator for Star Sports & Airtel mobile app.

Currently heading the new content development at major General Entertainment Channels, he has been creatively involved in the creation and acquisition of fiction, non-fiction and animated shows.

Rham Dhel is a vegan who dabbles in writing fiction. Her stories usually involve humans trying to find meaning in a world in disconnect with its animal inhabitants. She’s an eco-child, a friend to all creatures, and a defender of the meek and mute beings of the wild.

She describes herself as a simple girl who feels most happy and free among meadows and streams, who can live without the city lights but not without the lights of stars, for whom the trees and the birds and their very flowers and feathers are like her own home and family.

The words atheist, vegan, and childfree/ antinatalist pretty much sum up who she really is. She is a Filipina, married to an Indian and living in and around the Himalayas since 2011.

Many of her short stories have been published in international and national collections, anthologies and magazines. Some of her articles, poems and other short stories can be read at https://hubpages.com/@astralrose and https://penmancy.com/author/rham-dhel/.

She is the Co-founder, Creative Head & Chief Editor at Penmancy.

Bommadevara Sai Chandravadhan writes under the Pen Name, Vadhan, a moniker coined by his folks at home. Vadhan is a prolific reader who turned to writing a few years ago. His first published book is Shatru, a prequel to his yet unpublished fantasy Series. His second book, Agniputr: When Agni First Spoke, published by Bloomsbury, is hailed as one of the best multi-genre thrillers by some of India’s leading national newspapers, literary platforms, critics and top-end bloggers.

Vadhan is a lawyer by qualification and Director responsible for regulatory risk practice in one of the world’s largest professional services firm. Hailing from Eluru in Andhra Pradesh, born and brought up in Chennai, Tamil Nadu, living in Mumbai for more than two years and currently in Gurugram with his family, Vadhan has seen the different flavours of India. He has travelled extensively across the world in his professional capacity having worked for clients in Europe, Middle-East, Africa, North America, Asia Pacific and South East Asia. His writing encapsulates the essence of his travels and understanding of different cultures.

He is married with two children.

Anirban is the author of the No.1 true crime best seller The Deadly Dozen: India’s Most Notorious Serial Killers published by Penguin India.

He is the Co-Creator and Producer of one of India’s most loved crime shows on Television – Savdhaan India. His day job is as a television content producer having produced Crime Patrol, Fear Files and Isha Kills.

Anirban spent his childhood at Dr Graham’s Homes, a boarding school in Kalimpong, in the north Bengal Anirban is an alumnus of St. Xavier’s College, Kolkata where he graduated in English Literature.

He then went on to do his Masters in Mass Communication from MCRC, Jamia, New Delhi. He has been the Content Head at Channel [v] India,and Head of Brand Solutions and Non-Fiction at The Walt Disney Company (India).

He is an actor having acted in Sui Dhaaga and Mission Mangal.

He is also a standup comedian when he is not deep diving into crime for his television shows or books.

With 12 books to his credit, Neil D’Silva is a known name in the Indian literary world. His unique stories have struck a chord with a wide range of readers, eliciting praise from various quarters. He is published with leading publishers such as Penguin Random House, Rupa Publications, and Hachette among others, and has won screen adaptation deals on multiple books.

Neil D’Silva is the President of the India Chapter of Horror Writers Association.

Bestselling novelist, short-story writer and poet, Sujata Parashar became widely popular with her ‘Pursuit’ series and has so far written nine books across genres. This postgraduate in human rights, however, has a rich and diverse work experience. Apart from authoring bestsellers, Sujata is also the founder of a talk-therapy based platform, The Talk-It-Out- Express; a platform to enhance emotional wellbeing.

She was the recipient of the 100 Women Faces 2018 award, instituted by Womennovator and COWE (the Confederation of Women Entrepreneurs of India) for her contribution to Indian literature. She was also presented the prestigious Karamaveer Chakra Award (in 2016 and 2019) instituted by iCongo (the Indian Confederation of NGOs) and the UN. You can find out more about her on her website, http://www.sujataparashar.in

He has worked with the top newspapers in the country like The Times of India, The Tribune, Sunday Mail and The Pioneer in editorial leadership positions, and has also helmed a couple of news channels.

Besides working full time with English language newspapers, he has substantially contributed to the Hindi Press as a political analyst and as a writer of political satire.

He has written/directed/produced five 45 minute- long documentaries which have been aired on major channels.

Ashwini has authored 10 books in the non-fiction genre, besides a couple of novels. His latest, The Lotus Years– Political Life in India in the Time of Rajiv Gandhi was nominated for the Tata Literature Festival, 2020,   non-fiction prize. The rights of two of his other non-fiction works have been acquired by established film production houses.

He has also served as full Professor and Dean, Faculty of Mass Communication, in a well-known private university.

Prasun Roy lives with his family in Kolkata. He hails from West Bengal with his ancestral ties rooted in the district of Burdwan where his forefathers once lived.

Prasun’s first book RINGO & THE YOGI was published by the Srishti Publishers and Distributors and it has remained steadily in Amazon Bestseller categories ever since its release. In offline stores, the book has remained in the Bestseller list of leading bookstores including “Crossword Bookstore” and “Starmark Bookstore” and “Sapna Book House” and almost every “WH Smith Bookstore” in Indian airports.

Prasun’s second book THE GOOD WIZARD is also being published by Srishti Publishers and Distributors in the year 2021. The book is scheduled to be released in the month of January.

Prasun looks after his family owned business in Pharmaceutical manufacturing and marketing headquartered in Vadodara, Gujarat. The company has its corporate office in Kolkata. At present, Prasun is the Director and CEO of the organization and oversees the entire operations of his company Marsha Pharma Pvt Ltd (www.marshapharma.com).

Dr Jas Kohli is a cosmetic surgeon by profession and a humour writer by passion. His work includes two bestselling humour fiction books (Anything to Look Hot and Lights! Scalpel! Romance!) and humour poetry books in Hindi & Punjabi. He is a keen nature watcher and has founded a nature club. Humour snippets posted by him on social media are quite popular. Dr Jas tries to provide his readers with ‘food for thought’ in the guise of entertainment. He will continue to tickle your funny bone in times to come.

For further queries, refer Frequently Asked Questions ⇓ or write to us at penmagica@gmail.com

You are most welcome to raise your queries. But before you do, please read the below mentioned points to get more clarity:

Q3. Do I need to submit a fresh story?
A3. Absolutely! Previously published stories will not be considered for the event.  Please do not pitch a story which is already in discussion with some other literary agency or publishers.

Q4. Can I participate in more than one category/ genre?
A4. Yes, you can attempt more than one genre/ category, however all entries would be treated separately.

Q5. Is there an entry fee to participate in this event?
A5. The participation fee for the event is Rs. 800 to be paid after filling the online form here: https://forms.gle/sAN2VewrLBDtrRML9

Q6. What if I make it to Round 3 but do not win the deal?
A6. In case you are not selected in Round 3, you still get a chance to connect with The Book Bakers to pursue your proposal.

Q9. How will I know if my story gets selected for Round 2?
A9. Declaration of all results for Round 1 and Round 2 shall be done on the social media accounts of Penmancy and The Book Bakers.

Q10. Can I invite my other writer friends to participate in the event?
A10. Absolutely! The event is open to submission by anyone over 18+  years of age and residing in India.

Q11. Can I submit a pitch co-written with another friend?
A11. At present we are seeking only single author entries and therefore would not be accepting any co-written work.

For any other queries, please connect at penmagica@gmail.com