A knock at the door and frantic calls alerted Panditji. He peeped and found Dinkar Babu’s son knocking.

“What happened Amit, is everything okay? How is Dinkar Babu?” asked Panditji.

“Panditji, his condition is very critical. Please help us in fulfilling his last wishes of performing ‘Godaan’. He suggests that IT’s a must for Salvation,” replied Amit.

Dinkar Babu had a humble background and achieved many accolades during his stint spanning over thirty years in various scientific establishments. During his last days in office, he was anointed as the Atomic Advisor to the Prime Minister before getting attenuated due to Muscular Dystrophy. He was bed-ridden for the last twenty-one days.

The Government arranged all the essentials to get him cured but to no avail. Despite everything, his disorder was not ameliorated.

It was an award function on Christmas-Eve when he felt numbness in his lower extremities. He fell on the dais and was taken to the hospital but the Cerebral-palsy had already crumbled all the recovery which he had attained. He was put under intense medication for a week but except for minor improvement, nothing changed.

Within a fortnight, he lost control over the Peripheral Nervous System (PNS). In excruciating pain, he pleaded with his son to apply for Euthanasia as it was not humanely possible to assimilate.

It was not the service Dinkar Babu rendered to get rewarded like this from God. But it’s believed ‘Dearer is Nearer to God!’

Meanwhile, family members approached the Hon’ble Prime Minister to pave the way for Euthanasia. Empathetically, he constituted a high-powered team of Bureaucrats and Doctors to decide.

The people were restless to see a glimpse of Dinkar Babu but the spell of his sufferings had shaken all hopes.

The dystrophy coupled with palsy had done irreversible loss and completely incapacitated him. His well-wishers lost all hope. Now everybody was of the opinion that Euthanasia is the only panacea for his peaceful heavenly journey. The battery of Doctors, eventually, decided to administer high-dose painkillers.

It was the Makar-Sankranti but instead of festivities all around, people were anguished to get abreast of his conditions. All had their fingers crossed awaiting the outcome of the Board’s meeting expecting a complimentary decision.

Suddenly Amit saw him whooping. He scurried to his aid but by that time, Dinkar Babu fell unconscious.

He was rushed to the hospital where doctors monitored his vitals. But the Doctor’s dejected look was sufficient to suggest adversity.

One of them took Amit aside. He was counseled to take him home and respect his last wishes. With the heaviest heart, he took him home.

In the hindsight, Amit recalled his beliefs signifying that ‘Godaan‘ is the holiest gift in one’s life.

Hurriedly, Panditji was called upon to sermonize the rituals. But the moment after rituals, Dinkar Babu bid adieu for heavenly abode amidst chants of Mahamritunjay Hymns.

Eventually, the twenty-one days period culminated by setting free the captive soul to sail through the cosmos undeterred by the pain.
________________________________
GLOSSARY
Godaan: A Hindu religious practice wherein Holy Cow is gifted to the Brahmin to obtain salvation post-death. It is done just at a pre-death time.

Mahamritunjay Hymns: A prayer to Lord Shiva for Moksha. 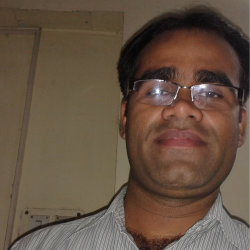 Kishore Jha
The author, a native of the Mithilanchal region of Bihar, graduated from the University of Delhi and currently posted as Income-tax Inspector in Kolkata. He is a vivid reader and passionate about writing memories, short stories, etc during leisure time.