Year 1952, Shanti was 15 when she had her first child. Shanti was one of her kind, simple yet gorgeous. Her husband, Hari was an engineer in Railways who was travelling for the most part of the year. Whenever he came, he ensured to make up for the time with his family.  His joyous nature, his love for music, his fondness for his 2 sons and 1 daughter seemed to know no bounds. Whenever he was away, the radio that he gifted her, was her only solace. Whenever his favourite song was aired, she would play it loud and hum along. She would feel him around and happily engaged herself in her kids. She would often, tell her kids about their father and his travel stories, till he came back and added more to the list.

Her radio, one day, fell off the kitchen slab and before she could react, was dilapidated. She was almost about to frantically cry and die over it but suddenly, she saw Hari standing in front of her, that took her by surprise. She forgot about the Radio for a moment and went on to welcome him. She would always, touch his feet and seek his blessings, in return for which, he would hug her softly giving him all the warmth he could. This time, Hari was back a little early than he normally would, that did not go well with Shanti. She tried asking him but then desisted as it shouldn’t matter since what mattered more was that he was with her and the kids.

After freshening up and spending some time with the kids, Hari finally took a dig at the radio. He picked the torn-out pieces and could thankfully repair it. Next morning Shanti woke up to his favourite song yet again and things got back to normal.

But no one could ever imagine that this was not going to be like this forever. After several rounds of hesitations, when Hari finally got his diagnosis done, he knew he won’t survive much now. He was diagnosed with brain tumour and owing to lack of medical advancements, nothing could save him now. At this juncture, he decided not to divulge anything to Shanti or his daughter.  For several months ahead, he continued to be his normal self and kept his treatment a secret. But since this was not going to go on forever, he left for his heavenly abode sometime later.

Shanti, at first could not take it, but soon picked herself up and got back to her normal self as she had to raise her kids. She raised her kids to the best of her abilities, made them stand on their feet. She kept smiling for them even with her tattered heart. She never let her kids know how alone she was or how broken she felt sometimes. For them, she was the bravest woman they had seen. 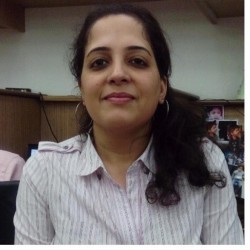 Pooja Chandna
Pooja is a working mother with a passion to write. She has written quite a few blogs and loves to write whenever possible in her free time. She loves to read and write about life, philosophy, fiction and romance.