I was sitting at the Kallor metro station. Although, I’d transited through this line many times before, today, the first time a sense of fulfilment and pride embraced me. There was a rumour spreading across the town that the Urban Development Ministry was going to award Kochi metro as the best metro project in India.

The train emerged like a piston and pushed a gush of hot air.  As it stopped, the station became a cylinder chamber. Everyone rushed off towards the train except the grizzly haired woman and me. If today were any other day, I wouldn’t have asked anything, but today I was on off duty. So I asked her where she was going.

She replied with a counter question, “Which city do you like the most, New York or Dubai?”

Puzzled me said, “Why? You know, neither could be reached by catching a train from this station. By the way, my name’s Vishnu.”

“Okay. Let me put this way then. Imagine you’ve stumbled upon a choice to go either to New York or Dubai which city you’ll pick?”

She peacefully waited for my reply.

“New York seemed a bit distant and old, a lot of past glories and billboard kinda stuff, but Dubai looks like the future.  Did you ever visit any…..”

“You know what, you and my daughter have a lot in common. When her company asked her New York or Dubai, she turned to me. I told her I grew up dreaming the American dream, but unfortunately, I couldn’t go there. You should ask this question to yourself, I said. To that, she didn’t say much then.

But later she revealed that she would go to Dubai at another chance. I asked why she backed out of Dubai. She said, ‘I heard someone had an unfulfilled dream.  I think I’m responsible for making that a reality’. You know, when she said someone, she meant her mother…me.”

“Such a cute daughter!  Which company she works for… I work for Kochi metro.”

I shook my head, beginning to feel a little annoyed.

She continued, “Unlike Dubai metro, neither New York nor Kochi metro has a foolproof platform screen door, which I think is very dangerous. Sometimes the mobile phone can fall into the track and crush by the train. My daughter’s phone lost that way once, at the Boston subway. You know Boston right?”

“Yep, so, when is your trip to your dream city?”

“Not every dream will get fulfilled, son,” she turned her face away from me.

“But your daughter? Where is she now? When will she come back?:

“Hmm…If I can ask this to my daughter, she would’ve replied, ‘The night I lost the phone I also lost myself’. But I can’t ask her. I know that she can’t come back. Oh God! I wish she’d selected Dubai. When faith creates a mangled mess, one could only wish.” 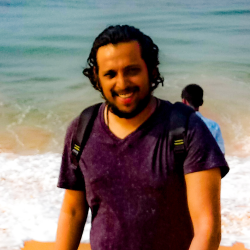 Soumith V
Soumith is a voracious reader, passionate writer, and an observer of human behaviour.