The sound of the anklets filled the air as Anupama, a thirteen-year-old girl came running to her mom. Her father worked as a temple priest in a remote village. She was a brilliant student and was the favorite of the school headmaster, Selvaraj. When her mother insisted Anupama to discontinue her studies, it was Selvaraj who stood firm and made sure she continued school. But fate had different plans for her. The village head decided to fix his son’s marriage with Anupama. She was not aware of weddings but feared to stay with strangers.

“Amma please, I don’t want to go there. They will not let me go to school” she cried and pleaded.

“Anu, you will stay near and can visit us anytime. They will care more and allow you to continue your studies. You are lucky,” and she kissed her forehead. Anupama trusted those words.

After the ceremony, she understood life was not as she imagined and tried to accept the reality. Within two years, her husband fell sick. Anupama’s prayers were not answered and soon he left for his heavenly abode.

The world around her came crashing down as she never imagined herself to be in this situation. She wished to stay with her parents again. Her thoughts were disturbed by someone whispering.

“This man was sick for so long and no woman was ready to accept him. Somehow they tricked this poor girl’s family.”

“What sin did I commit to fall into this trap my Lord?”

With teary eyes, she saw people cleaning a small place in the backyard and arranging a few sarees with some necessities. Immediately she remembered her old grandmother.

“Amma, why is Paati always sitting in the corner and covering her head?”

“Oh! That is nothing dear. When people get old this is the tradition for women. You need not worry about it now”.

The so-called tradition now became clear to her. Still shocked she noticed the barber waiting for her. Sobbing and with a vexed look she saw her helpless parents as mute spectators to the show.

She understood why Arundhati Akka jumped into the water well a few months ago and prepared herself to run there when suddenly out of nowhere Selvaraj entered the house. With anger in his voice, he shouted,

“Anupama, this is atrocious, you are too young to undergo all these orthodox rituals. I have always considered you as my daughter and I am here to take you with me. We will go to some faraway land where you will be safe from these monsters.”

Her in-laws and relatives started arguing with him. Finally, they agreed to accept Anupama’s decision as they believed she would never let down her parents.

“Which path should I take?” 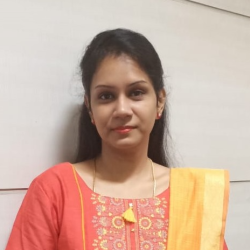 Ramya Viswanathan
Ramya V is an IT professional who delves into the world of books. A voracious reader who believes the pen is mightier to bring about a change. She picks her pen to write when she stumbles upon any social incident that she feels needs attention. Her passion is writing stories and poems in English and Tamil, winning across various platforms.

One thought on “Prowess”