Savita was alone in the house. It was dark. A heavy rain lashed against the windows. The curtains were billowing in the strong, gusty wind. There was no electricity in the house. It was pitch dark. It seemed  like a perfect setting for a horror film. Suddenly the clock started chiming twelve times in succession! She was terrified. She wanted to  close her eyes but somehow was unable to do so.

Where was she? The place looked unfamiliar.

She suddenly became aware of the outline of a face staring at her with unblinking eyes. The face was ugly and sinister. It said nothing, just stared leering at her. She tried to look away. A cold shiver ran down her spine.

Savita tried to avert her gaze but was drawn back to it as if by a magnet. She noticed the rough features and the cruel countenance.

Was it real or was she imagining things? Is it the play of light and shadow being processed in her mind as this repulsive being? Or was it a burglar? Why was she left alone to deal with all this? Did this beast do something to her family? Harm them in some way? She was petrified now, close to tears. This was turning into a nightmare,  a sinister one.

She let out a scream! Or at least she wanted to. But no sound came out of her throat.  Just some vague,  gurgling noises.

She tried again. No use.

Was there something wrong with her throat? She couldn’t bring out a word, try as she might. Was this a sorcerer doing some kind of black magic on her so that she wouldn’t raise an alarm?

She had to get hold of herself! She had to get help, and for that, she had to shout. Again she tried. But to no avail. If only she could  scream! And call for help!

She felt a whiff of  cold breeze. Everything looked hazy.She felt even more nervous now, frozen with fear. Where had everyone gone leaving her alone like this? Her anxiety was growing. She now started crying. But she simply couldn’t regain her voice.She just whimpered and moaned. She wished someone would rescue her from this swamp!

Suddenly there was a loud clanging noise! Her eyes jerked open. For a moment,  she couldn’t get her bearings. Then she saw that she was in her bedroom. The face had disappeared. Her clothes were still drenched in sweat. Her throat was parched. She slowly rose and took a deep draught of water from the bottle on the bedside table.

So all this was a bad dream?

Savita felt relieved and annoyed at the same time. She took a few slow, deep breaths till her racing heartbeat settled down somewhat.

Savita was still wondering why she had the dream and whose face it was that she saw so vividly in it! 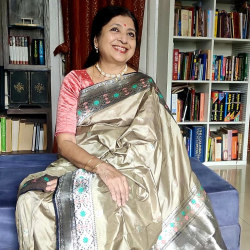 Shyamala Annavarapu
Shyamala is a doctor by profession and is interested in reading and writing. She is a member of the Facebook group 'Did you write today' and has won many prizes, contributed regularly to online paper Abu times and a few other online writing websites.