After all, tomorrow is another day!

Seeing the pyre burning, little Radha, all of six years stood transfixed to the ground.

Radha was a sincere school-going girl whom everyone adored in her colony. She was always ready to help everyone. She always took care of the younger children in a very delicate manner. She taught them discipline and cleanliness. She was intelligent and did well in her studies too.

She was very close to her mother who was the all in all for her. Her father passed away when she was a few months old due to chronic alcoholism leading to cirrhosis of the liver and its complications.

Now her mother had died of a sudden acute illness and she was left nowhere to go but this did not deter her. She took the help of a friendly neighbour woman and signed up in an NGO self-help group who taught them to quill recycled paper. With her steely resolve, she mastered the art pretty soon and began teaching the same to those who were slow at picking up the art. They, together, as a group, made many articles like earrings, necklaces, showpieces, wall-hangings etc and sold them in the market. They all shared the monetary benefits equally. Radha was quite happy.

Her oft-repeated phrase was, “After all, tomorrow is another day!”. She had seen and known many ups and downs in her life of six years. Her little brother Pannagabhushana, all of three years, was taken away to a faraway place by her Uncle on her mother’s expiring and had not seen him again ever. “She had been left to rot or die or get kidnapped”, she thought. “As was the rule always, male children were to be protected and brought up to get them to earn money and bring a name to the family. Who wanted female children?”

Radha had already resolved to take it into her hands that she gradually would set up her own shop selling trinkets for crafts and designing and then with the money she earns, she’d study. She achieved her goal of setting up a business and going to night school and educating herself and beating all odds, finally, after many years, joined a fashion designing course. She did extremely well and excelled in it with high marks and she was taken into a fashion school of high repute as a faculty and from then on there was no looking back ever.

She still believed and always quoted, “After all, tomorrow is another day!” She never forgot her mother and her little brother who were both taken away from her at a very tender age. She always missed them and longed for their affection.

She then met a dark-complexioned kind man who stole her heart. He was a visiting faculty in their institute. She proposed to him and they got married. Two years later, she gave birth to a baby boy whom she named Pannagabhushana after her long-lost brother. She wept tears of joy.
_____________________________________
Connect with Penmancy: 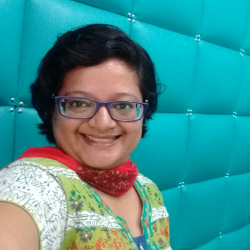 Amoolya Kamalnath
Dr Amoolya is an Anaesthesiologist and peri-op physician who pursues her not-so-recently discovered penchant for writing and poetry with a passion. She dabbles in painting along with her creative five-year-old. She, aside from balancing between patients and family, also delves into a bit of meditation and spirituality.