I saw her sitting on the footpath all by herself.
At times smiling, blushing & talking to her ownself.

Some days later, i saw her on the same footpath with her belonging.
Taking shelter under a tree (My Gulmohar), humming something, later on she started singing.

Her long earring was dangling & glittering in the sun.
Saw a passerby give her a cup of tea and a bun.
Dipping & sipping the tea her face looked she was having fun.

After a few days leaving her belonging, she went don’t know where.
Daily i used to look from my window if her bundled stuff was there ?
looking further here & there if she was anywhere.
She was nowhere.

Many months later she returned & sat under the same tree.
With her head down, no earrings, clothes soiled & her face was smile free.

I noticed, she kept looking in nothingness, all pale & blank.
I wondered what happened to her why was she so sunk.
All the colours on her dress had turned completely black.

The tree continued to shelter her from the stormy, heavy rains.
She wrapped herself with plastic sheet to save herself from the rains.

She shifted her spot as the tree fell due to heavy rain & gusty wind.
It made me restless whenever i looked at her. I realised she was always on my mind.

Again she disappeared & returned after a few months.
This time she looked thinner, unable to walk, her one leg was badly wounded.
Not just her leg, i think her heart was wounded.

She hardly had the energy to lift her own hand.
She laid on the opposite footpath on the open land.

Unbearable to watch her state, i called some NGOs who work for homeless people.
Was shocked by their response that their policy has changed & they no more work such people.

I argued that their website mentions you shelter the homeless.
Their response were shameful, ruthless & left me feel hopeless & helpless.

Two passerby played the role of good samaritan.
After a while saw the police come with a van.

They picked her very thin, lifeless & fragile body.
Some day she must have been someone’s somebody.
But today she was taken away, she belonged to nobody. 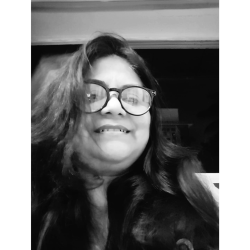 Designing words with feelings comes naturally to her due to her work experience and education.Her bond with her parents gives meaning to her existence & siblings brings out the craziness in her.