Zaara walked into her apartment at 5 am, tired from the night at the strip club. She was surprised to see that Sheena, her roommate, was up and had breakfast prepared. Sheena, a beautiful Black woman, had moved in a few weeks ago. Zaara suspected that Sheena knew about her profession. Sheena pushed a plate of food towards her.

“Thank you,” she said quietly.

“Why do you do this?” Sheena asked.

Zaara sighed and said nothing.

“I want to know. We don’t talk much but I worry about you.”

Zaara felt touched by her concern.

“I got this job the night I lost my phone. I came to the U.S. four years ago, from Bangladesh. My parents are poor, and I am the second oldest of seven children. My older sister’s husband abused her because we couldn’t afford dowry. I always excelled academically. My sister sold her wedding jewelry and told me to use it for my entrance exams and college applications. She wanted me to escape her fate. At the age of 18, I came here because Harvard offered me a full scholarship. I knew no one. I failed some classes in my first semester because of English language difficulties. I lost my scholarship and was put on academic probation. I had no money for tuition, rent, or any expenses. One cold night in January, I was walking around in a daze in downtown Boston. I decided to kill myself and wanted to message my sister to apologize to her. But, my phone wasn’t in my pocket. I started running down different lanes, trying to find my phone. That’s when I met Jake.”

“My club manager. He saw the despair on my face and calmed me down. I told him about my predicament. He offered me a job as a stripper in his club. At first, I was horrified- I, a hijab wearing woman, was being asked to strip. He told me that the hijab made me exotic and would bring me more money. He was willing to turn a blind eye to the fact that I would be doing it illegally, since I am not allowed to work anywhere off campus on my student visa. So, I took the job.”

“Don’t cry,” Zaara said. “I am quite happy. Now, I send money back home and can afford to pay for school. The money helped my sister leave her husband and start her own catering business, while my other sisters are continuing their education. My English has improved. I hope to get into a Ph.D. program one day, with full funding, and then leave this job.”

“Now, my turn,” Zaara said, “didn’t you feel uncomfortable about living with a stripper?”

“I am the daughter of a stripper,” Sheena revealed, “I am here because of my mother’s sacrifice.”

Zaara reached out and held her hand. Through their shared pain was created a lifelong sisterhood and a close bond. 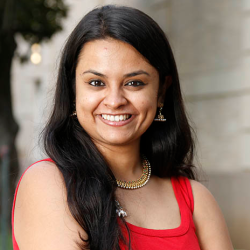 Shraddha Niphadkar
Shraddha Niphadkar is a licensed counseling psychologist, living in Missouri, USA. Her profession is proof that people, and their stories, fascinate her. She also loves to cook and bake. So, food and relationships often feature in her stories. She is a dog mom, and she firmly believes that is her most important responsibility.