It was a dark, stormy night… A night like that is something we catch on the television, telephone and social media – which building collapsed, which road is clogged, who is stuck where kind of updates. And Myra was doing exactly that! So far she called a few of her friends and family to ensure that they were safe. She also updated the Facebook status to “Safe in the storm”. She had checked out of the window a few times to check whether Zain’s car drove through the drive way.

Alas! She sighed one more time before drawing the curtains.

The night was pitch dark and all she could see from her window was occasional car head lights zoom by as the darkness engulfed them just beyond the next turn. The raindrops were now knocking her window pane like a traveler desperate to get shelter.

“The storm is getting harder” she mumbled.

She stole a more glances at the approaching drive way – finally she saw what she hoped to. Zain drove in. “Finally!” She exhaled her worries. The storm of worry and doubt inside of her now subsided – For now.

He unlatched the door and came in drenched. She waited for him to change and then give her the everyday smile and how was your day and you know what happened conversation. But that did not happen!

“It is a really dark, stormy night,” she said wanting to strike a conversation. She had no idea of the storm cooking up within him. He sat on his recliner staring at the dark window. Dinner was a silent affair and sleep evaded them. He was clearly disturbed about something and she was worried about him.

As the night breeze turned to a violent wind and graduated to aggressive turmoil, he wailed, “Monsters! They should be killed! No, death will be an easy way out! They should be flayed and then thrown to hungry wolves! She is just a child! 3 years old child! And 6 men – animals… rape her! Taking advantage of the storm, rape her and leave her in the street to die!”

He was a paediatrician who often came home with the weirdest cases of accidents and emergencies and stuff. She always empathized saying that he should just focus on saving them and that would be enough. But then she did not know how to react to this storm! She instinctively touched her 6-month pregnant belly as if protecting the baby within. The thunder outside was nothing as compared to the screeches she heard within her head now.

She didn’t wear enticing clothes or didn’t even have inviting body… the 3-year-old!

“Her mother was concerned if she would survive…” Zain hung his head, “Even if she does, will the world let her live, I wonder!”

‘It was a dark, stormy night…’ they thought as they stared at the ceiling lost in their own storm inside! 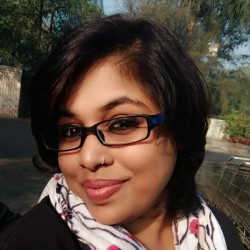 Mirah Shirodkar Mansuri
Mirah Shirodkar Mansuri is a chef by education, corporate trainer by profession and writer at heart. After spending 30 years of life seeking her calling, she has finally begun her journey as a writer. Having published a few articles, poems and a book - White lilies and the kiss on the forehead as an amateur writer, she continues indulges in blogs and self published work through http://www.lessonslearntbymirah.blogpost.com