“The food is tasteless,” she shrieked and banged her plate on the glass top dining table. The Belgian crystal vase came crashing down on the floor.

Born in the lap of luxury and pampered silly, Reena had turned into a selfish, dissatisfied and self-centred girl. People in her neighbourhood envied her luxurious life, but no one felt her neglect.

She had never felt her parent’s love. She was never hugged, kissed or patiently heard. They tried to replace their love by showering her with inanimate lavish gifts.

Her parents had worked very hard to build their architecture firm. They had a beautiful mansion in a posh neighbourhood with all the imaginable luxuries. Loaded with money they led a globetrotting lifestyle. They designed and built huge buildings, winning appreciation and awards all over the world.

But their huge and stately mansion was just a house; it never became a home.

Love and warmth had long left the mansion.

In the process of collecting accolades, they totally forgot about their own world, their daughter.

Reena, their only child, led a lonely life. Her greatest solace was the garden and her Golden Retriever, Rex. The only time the mansion smiled was when she worked in the garden or played with Rex. The butterflies and bees flitted around the flowers and Rex loved to chase them. The goldfish swam happily in the garden fountain. Birds had built their nests in the bottle brush trees laden with bright red flowers. The twittering and chirping birds brightened her day. Running barefoot on the grass, giggling with gay abandon, this was the best part of her day.

She tended to her garden with interest and immersed in it for hours. She watched the flowers bloom and dance in the breeze. Their unconditional love was a great healer, as she watched life blossom around her.

The cherry tree was fully grown with its luxuriant boughs hanging out, over the boundary wall. Laden with luscious cherries, it attracted the children from the neighbourhood. She could hear them giggling and plucking the cherries. Her first thought was to shoo them away but the tinkle in their laughter was different. She had never felt it before. It was of absolute glee!

She smiled. For the first time in her life, she had shared something with others.

She returned her focus to the garden. She would now fill the gaps in her life by helping others smile.

She had found her calling.

Her giggles reverberated in the house and echoed down the valley.

Destiny is a mysterious force that no one can comprehend……

Outside stood a labourer’s daughter, coated in mud, wishing to swap her life with —The Girl in the Mansion. 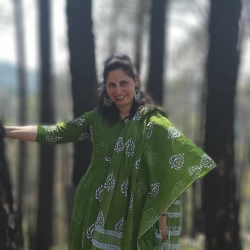 Pashmeena Chowdhary
Pashmeena is a budding writer and blogger. She is attracted to the environment and social issues and is trying to make a difference. She considers herself to be in the process of learning from a great teacher called "LIFE".