The ramshackle stall’s make-shift shutter was closed today. Ankit’s gaze shifted to one of the stilts. Still the same, resting on a cairn methodically made of small and big pieces of rocks, and in between stuck were some blocks of wood.

“Get in, my boy.” Smiling, his granny signalled him to pay his homage to his grandfather’s garlanded photo.

Once Ankit had offered a prayer, he dropped his bag in the room he always slept in when he was a boy. When he wasn’t married. When he hadn’t committed the fallacy of choosing his path.

Then he went to the kitchen—the family’s usual gathering spot.

An aunt quickly fetched him a glass of water. Another asked him for tea. His mom murmured in his ears, “Why didn’t she come? Could have sent your daughter… at least. A child helps in the peace offering.” Then she announced to all the scrutinizing eyes, “Now Kakajee’s soul will find peace. Ankit will attend the Garuda Purana as his eldest grandson.” She folded her hands, seeking peace for her father-in-law.

Pretence. He jerked his head. No one has changed here after all these years.

Before he could finish his tea and listen to the oximeter’s malfunctioning scheme in Kakajee’s death on the first night of the year, someone roared his name. With Bade Chacha’s voice, a silence ensued around.

Chacha didn’t hurl any taunts, though. This is only the preamble, Ankit knew.

After the loud shlokas of the Garuda Purana, the priest praised the departed soul. In his prime, Kakajee was famous for helping the needy. And after retirement, Kakajee still found ways to bestow the poor.

As a teenager, Ankit erected the rickety stall on the cairn just outside their house with Kakajee. Then it was given to a paanwala without any rent. That cairn survived the time; theirs couldn’t.

The Terhavi passed peacefully despite hushed voices throughout the rituals. Some called him a traitor, some a bad breed. His bhua gossiped, “His marriage is already falling apart. Only if he had married…”

After the guests departed, his uncles kept no qualms in dissecting his sins. Eyes stuck to the subduing flames of the yajna, he ignored the clamour escalating around him. The nephew was matured enough to not pick a fight over petty blisters of fiery remarks against his intercaste marriage.

Granny jabbered. Aunts slowly fuelled the tiff while his mother sat like a rock, and father couldn’t oppose enough. The relatives didn’t spare to lacerate every thread of Ankit’s honour. His nails dug into the skin of his palms.

When the brawl escalated beyond bounds, he picked his bag and hired a taxi for the airport. Before he boarded it, a thunderous noise forced him to turn.

The stall that was passed from a paanwala to a laundryman to a mechanic had crumbled into dust. The cairn bearing the load was destroyed into shards. 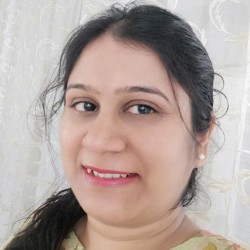 Rashmi Agrawal
Rashmi overthinks and, at times, thinks weird. And writing becomes her egress to express. While writing stories, she also ventures into a parallel universe of copywriting and ghostwriting. When she is not writing, she vexes her 10-year-old daughter in all motherly ways.