Kanthi and Abhilash had been married for two months and Kanthi was already having doubts about Abhilash. During the courtship days, Abhilash was always charming and gentle. Even now Abhilash was the same kind and gentlemanly person during the daytime. But it was his brutality in the privacy of their bedroom when they made love that shocked her. After marriage, they had purchased a house in the outskirts of the city and moved in there.

Slowly Kanthi began to dread nights. Till they got into bed Abhilash would be charming and kind. But afterwards, he would subject Kanthi to unspeakable humiliation. It was as if he was wearing a mask. At nights she was unable to recognize the man she loved.

Kanthi put up with it all because she sincerely believed that Abhilash was not responsible for his actions and something supernatural was at work. She decided that the death of the painter in the house had something to do with it.

After that, she hunted for the lost paintings every day.  But she was unable to locate the paintings anywhere. But that Friday when she was searching in the cellar, one of the floorboards sounded hollow.

She bent and prised the board loose with her knife. She saw stairs leading downwards. She went down the stairs. She finally reached a room. There were beautiful paintings everywhere. She was attracted to one particular painting. It showed a sensuously clad woman. But painted over her face was a terrifying mask.

Suddenly she heard the sound of Abhilash’s car. She ascended the stairs rapidly and climbed up and closed the cellar door. They had dinner and afterwards they retired to their bedroom. And that night Abhilash was particularly brutal in his treatment of Kanthi. Kanthi could bear it no longer and ran out of the bedroom.

Abhilash chased her like a man possessed. Kanthi decided she would hide in the room where she had found the paintings. She reached the cellar and went down the stairs. But Abhilash had seen her and he came running after her. But once he was inside the room his steps slowed. His eyes were fixed on the painting of the woman whose face was covered with the mask.

Kanthi suddenly realized what she had to do. She reached out to the painting and scratched at the mask fiercely. Soon revealed underneath the mask was a beautiful face with a halo around it. Abhilash stopped short and swept Kanthi into his arms. There were tears in his eyes. The mask of cruelty had slipped off Abhilash. 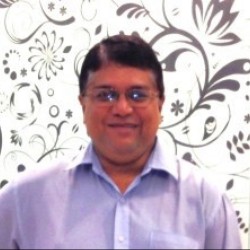 He is a published poet. He regularly writes articles, short stories, flash fiction etc on his blog. He is also the author of two novellas in the thriller fiction genre titled 'Eighty Hours To Save Karen' and 'The Krishnapur Kidnappings'.

One thought on “The Mask Of Cruelty”