I  get into a taxi. But instead of taking me to the place I wanted to go, it took me to a place I need to go….yes…. I came back from US after 10 years at the Indira Gandhi International Airport, Delhi. My old driver was waiting for me at the airport. He had started driving a taxi after quitting his job with my father. I had to go to Agra to meet my mom, dad and my sister. We started our journey through Yamuna Expressway as it takes around two hours to reach Agra by this route. En route my driver kept asking questions and answering my queries too, my favourite music in the background. Ramdaran knew us so well that he knew the kind of music I liked years back. My father was from the well to do families of Agra. We have old employees and servant who are more than a family now. They have spent their entire life with us. I kept asking about his family and his kids.

“How is Vimla and Kamla?”

“They are married and settled in Allahabad, monu bitiya.(My pet name) Both of them are married in the same family. They are sister-in law also” Giggling he answered. He was thrilled at the thought of his daughters.

I signed a sign of relief and started looking outside the window. It was that time of year when I was only 15 year old in 10th grade and my sisters were 12years-Seepi and 8 year old Meeshi. My father used to own a small grocery shop at that time. My mother was a housewife. All three of us were in school. I used to teach all my sisters and helped them in doing their homework. My father loved me for I was the ideal daughter. I could see his problems and discuss them with him too. We had financial worries. We used to live in a rented accommodation. There were 18 households in that Haveli-Kothi number 73. The Haveli was built in British raaj and had 15 servant quarters. All servant quarters were in a single row in the left side of the Haveli. Right side had tube well and 60 acres of cultivated land where our landlady used to grow crops-wheat and vegetables. Fruit trees of pomegranate, lemon, mango, custard apples and guava were everywhere. We had wonderful time there as kids plucking all fruits. The fields were lined by karondas bushes. There were both varierties of Karondas the green and the white ones. I used to go walking to the nearby Kendriya vidyalaya. That everyday walk, I still remember…keeping bags on the bullock cart as we get tired…walking along long wheat grass with a stick in hand, talking about the school and all teachers. All kids from the Haveli used to study in the same school as if it was a rule. After coming back from school we would decide in advance when to come out after doing our studies foe playing outside. All types of games you name it and we would play-gulli-danda, kanche, stappu, aaish paise. Yes there was no TV in Agra at that time so all kids had plenty of time at their disposal. All mothers used to keep calling us at the time for dinner as it was difficult to find us. There were no phones too. Most of the people living there had a job or were a small shop owner. We never had any luxuries then. We had three servant quarters taps and four community toilets. Surprisingly the Community toilets had no doors but a S shaped entrance in which you can enter only after asking –Is there anyone inside? We were still very happy in each other’s company. Since houses were very close to each other we could listen to everything what is going on in the other house. In front of each house was a closely build bathroom-either closed with a curtain or a broken door borrowed from somewhere.

The first house of 15 houses was occupied by a South Indian family…3 sons and their only daughter my best friend Rajalakshmi. Most of my lunches, dinners happened to be in that house only. We used to sleep together and go to school together. We were both good in studies but my Maths was not very good. Mr Iyer –Rajalakshmi’s father had three sons-youngest in B.Sc, middle one doing a job in medical company and the eldest was in Madurai. He himself was employed with ADRD. Mrs Iyer was a very good in cooking and she became my mother’s friend. My father requested Mr.Iyer if he could allow his youngest son teach me the subject-Maths. He agreed and Rajamohan used to frequent our place to teach me. I was a shy and a timid girl. I used to stitch clothes for all my sisters, paint, write stories and cycle to take tuitions to earn my pocket money. I was a small girl with big eyes. I was a quiet girl. Hardly anyone has listened to me speaking. I was shy of all the boys in my class. I would never talk to the boys of my class. But slowly I started hero worshipping Rajamohan. He was doing his Masters in Chemistry. Was he TDH-Tall-Dark and Handsome? Nooo he was not very good looking though but he starting liking me –I think gradually as he started knowing me. But he never shared anything with me or her sister. Rajalakhmi was in 12th Std when I was in 10th std. If I get fewer marks in Maths he would go and meet my teachers as my tutor. I was scared that my parents would not like it. My teachers would ask-“Is he your elder brother”? I would just nod my head in affirmation.

Once I was not well he came to teach me and I vomited on him. I apologized and felt sorry but he just looked at me and said –Go to bed, I will bring the medicine. That day was strike and blackout in Agra. But he went out and got the medicine for me. On my birthday he handed me musical birthday card at a time when even buying cards was a luxury. There were so many girls in the Haveli which would crave for his attention. Some would come while he was teaching me and would talk to him in hushed tones while I write my sums. He would look at me to get an answer or an approval but I would always give him a blank look all the time. What was that? I wanted to see him, meet him, talk to him-but would be scared to say anything to him. I liked his attention.

Rajalakshmi surely knew something is there in his brother’s mind. She thought I am too young to understand all this. One day I went to Rajalkshmi’s house to call her for going to the movie. There were sounds of water coming from the bathroom, I thought she is taking a bath ..To tease her I peeped from the curtain and to my shock stood her brother stark naked wiping his face. Quickly I left the curtain before he could see me, I rushed toward my place. Rajalakshmi came to call me after a while and asked me -“Did you remove Rajas curtain? The stupid fellow feels he is so good looking that everybody wants to look at him, hee heee” I was stone dead. I just did a No with my head. But the next day Rajamohan had a sheepish look when he came to teach me.

One day Rajamohan asked-me if I could wake him up early morning as his parents and sisters have gone to his native place and he doesn’t want to bother his brothers. I asked him-“How?”  If all are sleeping it would be disturbing if I kept knocking at the door early morning. Since houses were very close, everybody would wake up. He suggested that he will tie his legs with a rope and keep the other end of the rope outside the window. Next morning I got up at 4am and saw the hanging rope. I pulled it once. Nothing happened. I waited for sometime pulled again. No voice, I pulled again. Thud a voice came of some-one falling from bed. Then I pulled again …Raja started shouting- let me wear my lungi first. Stop pulling my leg again and again I am awake now. I kept laughing and laughing till I see him looking at me half asleep from the window. I ran towards my house laughing.

He came till my final exams. Since my studies of 10th were over, he stopped coming to my place. We met a few more time while crossing over to get water from the tap or sometime I would go to meet Rajalakshmi or to see him?? We also moved out of the Haveli to a better place. My father’s business grew and he opened his factory of making shoes.

Initially Rajalakshmi used to come to our place. I kept asking about Raja. He did his PhD and became a lecturer. Last I heard that his mother was looking for an eligible girl for him as Rajalakshmi and his brothers are married. I did my masters in sustainability and moved to US to do my further studies. Rajalakshmi also became Principal at one of the prestigious school. My parents kept telling me to get married since I was the eldest but I had a lot of work to do so I had given a green signal to my parents to carry on with my sister’s wedding. My sisters got married after waiting for me. Both my sisters came to US to do shopping for their wedding and we had a blast.  I attended both the weddings at Jaipur and Lucknow since the boys were from that place only. One is in Jaipur another one in Lucknow. But I never got a chance to come back to Agra for 10 years since I left at the age of 21. I am now working with UNDP as Consultant. My parents and my sisters visited me thrice. Both my sisters are married and have kids. One of my sisters has come to meet my parents as her daughters summer vacations have started. They might be waiting for me.

A big sigh of relief and I am back from my past.

“Arre Kaka-where are we going”? He said nothing and I was standing next to a big Haveli surrounded by trees and a jungle. Ohh why did he brought me here!

“Why have you brought me here after 15 years?” He bowed his head and gave me a book.

His thesis book of Chemistry was in front of me. I opened it-on the front page was my picture and was written –“To the love that remained unspoken for years”. Ramdaran showed me the way to the first house of the servant quarters. As I entered on the bed was a very sick Rajamohan and all his relatives, parents, brothers. On seeing me everyone moved out. We had a lot to talk about and a lot to discuss. A lot of unanswered questions. 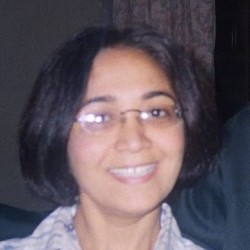 Rehka Lalla
Rekha Lalla loves writing, painting and travelling. She is an environmentalist by heart. She loves nature and feels blissful in its presence. She wishes to keep her world green, clean and loving. She has been an educator all her life, right now she is a green crusader.