Before starting of the big award ceremony Kailash, a famous scriptwriter and director sat in the park and found a piece of paper under his seat written “DON’T LEAVE!” He was surprised as he got the paper from the same place where he often gets his sample story for screenplay.

It all started with the journey of a little boy who was sensitive in nature. He meets a girl, falls in love with her and gets a job. As a result of betrayal from love and diplomacy at work, he becomes frustrated and loses touch with reality. Inspite of being physically present on earth he was not satisfied with his incomplete soul. He wanted to find the purpose of his presence on earth.

He eventually became drawn towards the theatre world as it blurs the lines between fantasy and reality. He left his mark on theatre direction, staging and script writing. Every time he struggled to create a story, he discovered a handwritten script under the seat of his housing park. These handwritten sample scripts contributed significantly to the theatre production, which helped him become famous in theatre and film industries.

In reality he was certain that the script weren’t his and this made him feel guilty. Several times his guilt haunted him; he remained aloof from people because of the fear of losing trust of the admirers and followers. Then the most important day came when he was invited to deliver speech as best script writer in front of thousand of his followers and admirers. His hands were trembling, and he was terrified. He carried a great burden of guilt with him throughout these days. Today he was going to confess his guilt.

And this is when his hidden part of self arrived and said “DON’T LEAVE, I am the inner self. Many people forgets me as they grow old. Most people die without even exploring me. I was your best friend during your childhood days when you had an innocent heart with no worries. Please let me be a part of your life.”

He suddenly realized something and got all the answers within a flash of light. Those scripts were actually written by his inner self which he weren’t aware of all these years. He merged his inner self with his ideal self. His ideal self always did what was expected of him and not what he liked until he saw that performance in a theatre. Now, he felt more confident about his extraordinary talent and unique abilities. He carried himself with pride and began to give the speech. He never again let anyone limit his potential and say what he was capable of. He finally reconciled with his inner child, which he had left a long way behind due to the burden of the society.
________________________________
Connect with Penmancy: 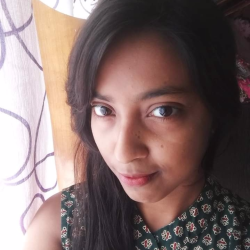 Angana Nandy
Angana Nandy is a psychologist, writer and philanthropist. She believes in working hard and creating footprints to leave behind.